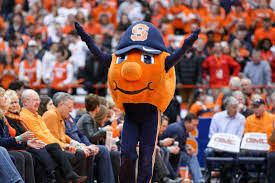 The first orange mascot made his debut in 1980. The brown leggings were not the only major difference to the mascot of today, the original Otto was originally named Clyde, the name chosen by brothers of the Lambda Chi Alpha fraternity, who had portrayed Syracuse’s mascot for over 40 years. In December of 1995, Chancellor Kenneth Shaw renamed the mascot, Otto, who has become Syracuse University’s official mascot. Otto’s costume can be customized for special events, they can dress him up with glasses, a different hat, jackets, or pants. During the process of naming Otto, there were two options; Opie and Otto, Otto was chosen because Syracuse did not want Opie to be rhymed with dopey by opponent fans. Crazy but true.