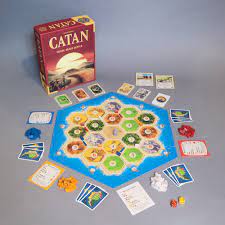 This is how the game looks when it is set up.

In 1995, Franckh-Kosmos Verlag as Die Siedler von Catan released “Settler of Catan.” Settlers of Catan and all of the various remakes of the game are a great resource management game. There is a degree of randomness to it because it relies on rolling a die to determine what resources players can get, if any. It is a strategy based game because it is both a race to get 10 points first but players also have a limited number of things that they can build. Trading is also a part of the game and sometimes there is a degree of manipulation in order to get the trade needed to benefit the player, but also try to convince the other player the trade is beneficial for them as well. There are several expansion packs and different versions of Catan, for long time players who want to further their knowledge of the game. Using strategy, knowledge, and playing a mental game are all important to succeed in this game.