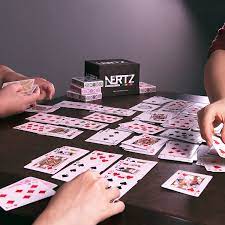 This is what the game looks like in action.

In 1995, John Ronnander and Majicsoft for the Atari ST system released “Nertz.” ” It is a game that my family likes to take while traveling because all we need are decks of cards and we build up our scores all through the trip,” explains Ms. Cleveland. The game plays just like solitaire in which players build up the Aces/suits in the middle going from Ace to King and down in their personal play area a player builds down king to ace but they must alternate red on black and black on red. Where the game is actually a competition is the aces in the middle are free for all, anyone can play on the cards in the middle, so one person can play an Ace of hearts and someone else can play their two of hearts on the other person’s ace. This makes it a race to get points out. “I like it because all you need is one deck of cards per player but they must have different colored backs,” states Ms. Cleveland.