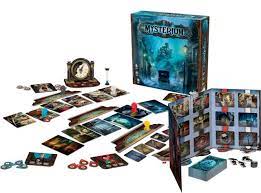 This is what the games look like when it is fully set up.

On October 23, 2020, Libellud released “Mysterium.” In this game there are players and one ghost. Whoever chooses to play the ghost has to try to get the players, psychics, to solve their murder without speaking at all. The ghost must give the players each vision cards, cards with pictures, to help guide them to the possible murderer, location, and weapon used for who killed them. Each player must correctly guess their suspect, room, and weapon before a certain number of turns goes by or the ghost cannot figure out who murdered them and they become a lost soul. If the players successfully each get their personal crime scene figured out, they move to the final round where all the suspect pools are voted on by final visions given by the ghost. If the psychics can come to a majority vote on the correct killer, they win the game, if not, everyone loses. It is definitely an interesting strategy game as players have to try to work together to figure out and decipher the clues the mute ghost gives them, but there is a timeline to do it in. “I also like it because it is less competitive as it is an everyone wins or everyone loses type of game,” states Ms. Cleveland.