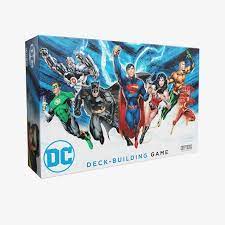 This is what the outside of the game looks like.

In November of 2012, Cryptozoic released “DC Deck Building Game.” “I like that game because I love the deck building mechanics,” states Ms. Cleveland. Everyone starts out with the same deck and the same resources but then on their turn they can use their cards to buy new cards essentially building their decks.  There is an overall goal of the players all defeating the super villains but each card that a player buys is worth a victory point and at the end of the game each player tallies up their points and the person with the highest number wins.  Every game plays very differently depending on how many players, the random order of cards that players can buy that appears, and which character people are playing because the characters all have special abilities. The amount of players required is anywhere between 2-5. “In the DC Deck-building Game, you take on the role of Batman™, Superman™, or one of their brave and heroic allies in the struggle against the forces of Super-Villainy,” explains Cryptozoic.