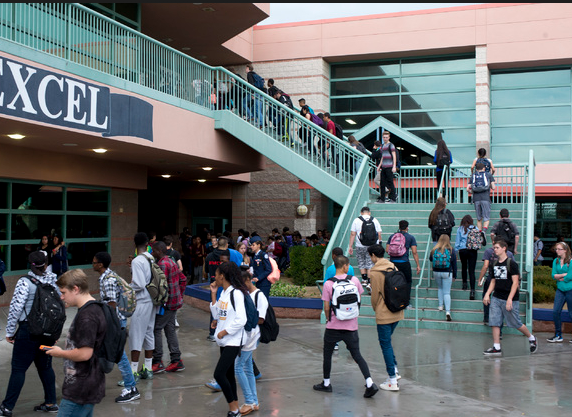 Principle Kannon has announced that beginning this week, Shadow Ridge will be having three lunches per day instead of two. Students have been struggling to get lunch due to long lines and crowds have made social distancing during lunch almost impossible. Implementing these changes will hopefully allow every student to sit down and finish their lunch before the bell rings.

Last week there was much confusion about how this new lunch schedule would work, and the reason for the sudden change, but since then, Assistant Principal Missy Shipp has been able to clear some things up.

“We have 1700 students at each lunch, and it’s a lot to make sure everybody’s safe. There’s not enough tables and chairs and we needed to just split it up,” she said.

Working out the specifics of the new schedule took some time. In the new schedule those with 2nd lunch have their 5th period split in half, and leave for lunch in the middle of it before returning to the same classroom.

Kids with second lunch will also have a 56 minute 5th period, whereas every other period will remain at 46 minutes.

“Making the decision was very difficult and time consuming but we just want what’s in the best interest of the students, as well as the teachers, and it’s always tough,” said Ms. Shipp, “We hate to change up everybody’s routine so suddenly, but for everybody’s sake we just had to make those hard choices.”

To account for the fact that 5th period is going to have an extra 10 minutes, another change is that passing periods will be 4 minutes instead of 5. This seemed to be the only way to add an extra lunch to the school day without making it longer.

Students seemed pretty concerned about this change, given that many have to walk from the portables to the 800 or 900 hallways everyday, and are barely making it within the current 5 minute timeframe. However, Ms. Shipp assures students that teachers will be lenient as everyone adjusts to the new schedule.

“It’s going to take a little bit to get it down pat, especially with people coming from the portables to the 800’s. Luckily, the teachers already have an idea of who’s coming from where because of the routine we already have in place. If you’re a minute late, as long as you’re getting there, you’re hustling, you’re moving, we understand.”