Millions of Cicadas Come Out of Hiding 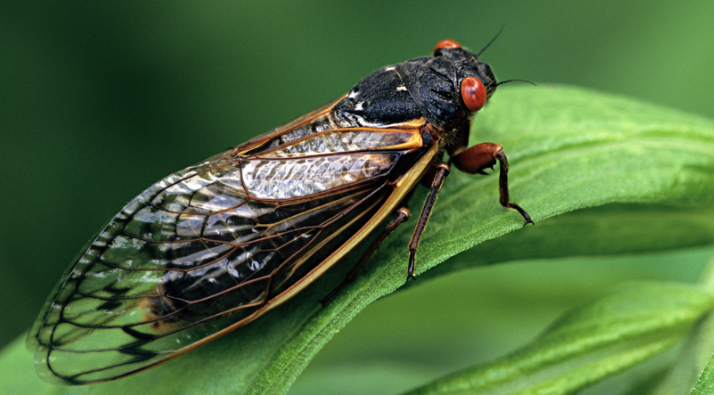 A close up of a cicada from Brood X

This coming May and June, millions of cicadas are emerging all over the eastern US after 17 years underground.

“They may amass … in parks, woods, neighborhoods and can seemingly be everywhere,” Michigan State University entomologist Gary Parsons explained the phenomenon. “When they are this abundant, they fly, land, and crawl everywhere, including occasionally landing on humans.”

About 15 states will experience this invasion of cicadas firsthand, the states along the east coast stretching all the way to Illinois.

These bugs, though awful for people who are afraid of them, are not harmful in the slightest. They don’t sting or bite, though the sheer amount of them means they’ll definitely be getting in peoples’ way. Though some will obviously be afraid, Dan Mozgai, a citizen scientist explained how the phenomenon can leave people in awe of the sight of them.

“There’s an awesomeness to it because you’re surrounded by thousands, maybe millions of these creatures that weren’t there the day before,” says Mozgai. “It’s like an alien invasion, like being in a movie.”

These bugs differ from the regular cicadas that come out of hiding every year. They’re known as periodical cicadas and are seen much less frequently, in 13 or 17 year cycles that scientists are fascinated by. The reason they emerge from their underground homes is to mate, and everyone is familiar with the song of their mating call.

Biologists at the University of Connecticut have been attempting to map the trends of these 6 specific groups of cicadas along the eastern US, known as Brood X.

The bugs mostly emerge from their underground homes synchronously, but some stay behind, leaving a 3-4 year gap of stragglers that confuses scientists and causes them to struggle to get an accurate map. Though, the university has stressed that “a misleading map is worse than no map at all.”

Either way, thanks to the cicadas, scientists get to study everything about them in much more depth, and some people will get to be nostalgic as they remember the last time the cicadas emerged in their youth.

“It’s amazing that they can keep track of such a long period of time so precisely and emerge synchronously at any given location,” says Chris Simon, a professor of ecology and evolutionary biology at the University of Connecticut. “They bring out the inner child in many people and recall the excitement of their youth at first seeing them.”