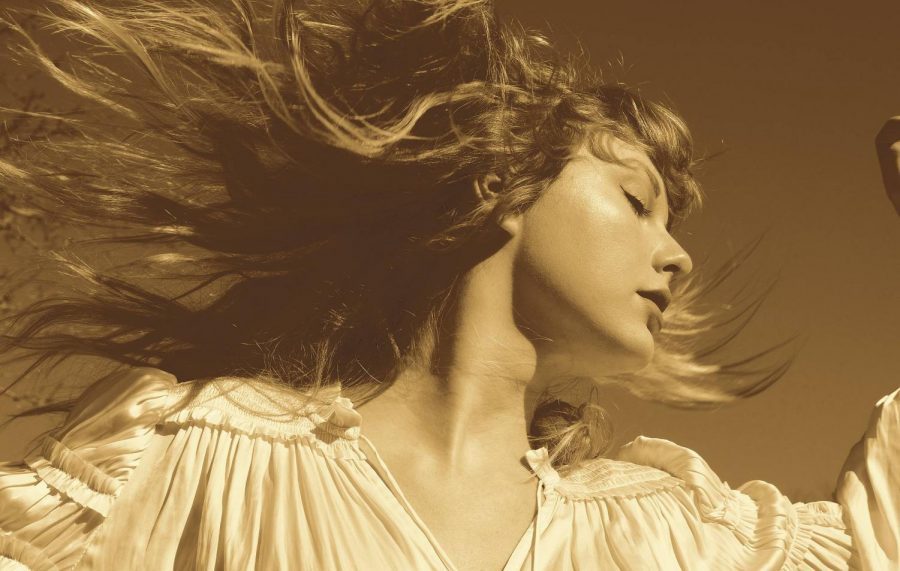 It’s 2008 and Taylor Swift’s second album, Fearless, is taking over the music industry. The songs “Love Story” and “You Belong With Me” are being blasted from the radio and everyone sings along. It wins Album of the Year at the Grammys, the Country Music Association Awards, and the Academy of Country Music Awards, making Taylor Swift (then 20 years old) the youngest artist to win the award at the time. It becomes the best-selling album of 2009.

Suddenly, in 2019, this album, and all of Taylor Swift’s others are taken from her. Big Machine Records, who Taylor Swift signed with at the beginning of her career, refused Taylor’s offers to buy back her masters, and instead went behind her back to sell them to Scooter Braun – someone Taylor Swift had “bad blood” with.

On Good Morning America, Taylor stated, “I just think that artists deserve to own their work, I just feel very passionately about that.” This is why Taylor is bringing everyone back to 2008 by re-releasing Fearless (Taylor’s Version) to take back her music.

On February 11, Taylor posted on her social media revealing news about the release of “Love Story (Taylor’s Version)”, the completion of re-recording Fearless (Taylor’s Version), and a picture of her new album cover. Along with this picture, she also posted a message that was quickly deciphered by fans to read out “April ninth” by combining all the capitalized letters. This day was believed to be when Fearless (Taylor’s Version) would be released. The fans were right about that. Taylor’s next post on April 2 was of a vault door opening with scrambled words coming out of it. On April 3, Taylor congratulated her fans for cracking the code and guessing all the “From The Vault” titles. She then shared the full track list: all the tracks from the deluxe edition of Fearless and also six unreleased additional tracks from that era. This added up to 27 total tracks for her new album.

“You All Over Me” and “Mr. Perfectly Fine”, both songs “From The Vault”, were released prior to Swift’s entire album on March 25 and April 8 respectively. These songs got fans excited for the new album and gave them a peek at some of the songs that were supposed to be in the original Fearless album. They also gave fans a feel of how the rest of the songs were going to be with Taylor’s new mature vocals and crisper production, but still nostalgic enough with her returning country twang.

“Taylor is incredible, I can’t believe she didn’t show us these masterpieces before!” Alycia Stewart, junior, commented.

A main concern for the album was that Taylor Swift would obviously sound different 13 years later and would be releasing already familiar songs. Fans were more than happy to relive the experience of Fearless being released, even if it was the same songs; but Taylor still decided to treat them with her vault songs. Taylor Swift also strived to keep everything mostly the same production-wise with the same keys, tempos, instruments, and inflections in her voice for her re-recordings. While there were small lyric changes and her voice was slightly different, fans were all for it.

Sam Evenson, junior, shares, “To most people, you wouldn’t be able to hear many differences except the level of growth in her voice, but there were actually a lot of very small changes! Her breath control has definitely improved from the time she was 18, and you can hear it in the newer versions. She also doesn’t strain to hit some of the higher notes in the songs, and it almost has an elegant feeling to it. She also made a few small lyric changes, like in the beginning of ‘You Belong With Me’, she used to start with ‘I’m in THE room it’s a typical Tuesday night’, but in the re-records she actually changed it to ‘I’m in MY room it’s a typical Tuesday night.’ There were a ton of small changes that devoted fans caught, and it was so exciting to relive all of these songs again! I absolutely loved all of the changes that she did, since it’s now truly ‘Taylor’s Version.’”

Fearless (Taylor’s Version) reached number one on the Apple Music charts in the United States and the UK upon release. Its tracks claimed the top ten spots on Apple Music’s global country songs chart. The success of this re-recording isn’t only good for Taylor, but for other artists as well who don’t own their music.

“I love that she owns her music now! She absolutely has every right to own her work, and it was completely messed up that she wasn’t able to in the first place. She’s definitely changing the music industry as we know it, and sparking tons of new discussions for other artists. Owning their songs is becoming a bigger and bigger topic, and Taylor is changing the game with every album she re-records,” Evenson remarks.

Michael Dustin, sophomore, has another take on Taylor Swift’s re-recordings. “I haven’t really listened to them, but it’s a fantastic marketing strategy. She already knows the songs and so does everybody else, so it’s a super simple money grab.”

While it is true that Swift will stand to make some bank on this re-recording, her original purpose in doing this was to own her music again and the process of doing so has been difficult and tedious. Swift’s two surprise albums, Folklore and Evermore, go to show that she just wants to put her music out there for her fans to enjoy and resonate with. Other artists have tried to re-record their music before and turned out unsuccessful. Taylor Swift is pioneering a path for the public to be more open to the idea of re-recordings and for the path to be easier for these other artists. With Fearless (Taylor’s Version) done and released, Taylor still has five albums left to re-record.

Evenson emphasizes, “It’s going to be a long process to get all of her albums re-recorded, but I’m excited to see how it plays out! Right now she’s currently hinting that her 5th studio album, 1989, is going to be the next re-recording! Taylor loves dropping easter eggs as she goes, and she’s definitely letting her fans know what’s coming. She’s only just begun the process, so we’ll definitely be seeing more of Taylor Swift in 2021.”