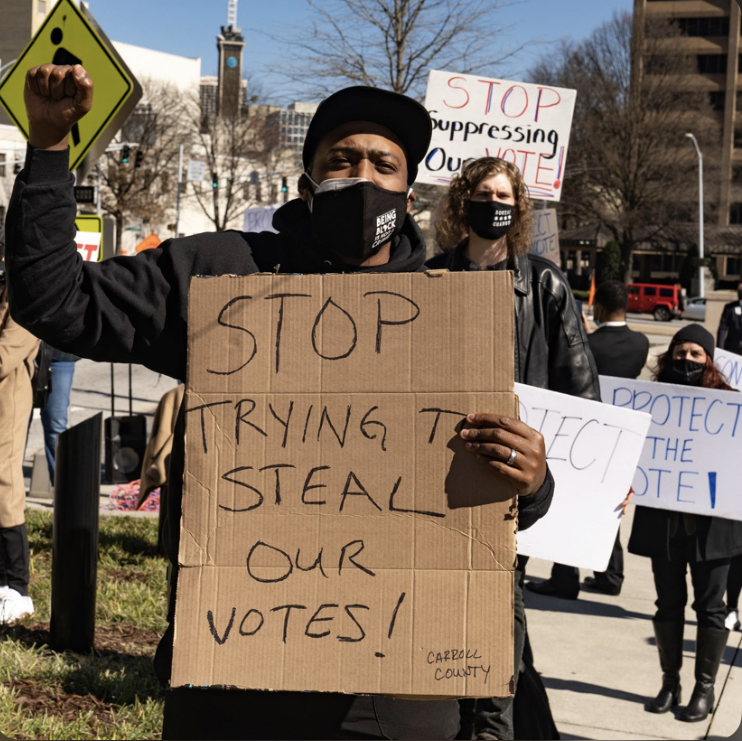 A new restrictive voting law was passed in Georgia, and Biden has a lot to say about it being an unconstitutional attack on the people’s right to vote.

“This law, like so many others being pursued by Republicans in statehouses across the country is a blatant attack on the Constitution and good conscience,” Biden said in a statement released by the White House on Friday afternoon.

“This is Jim Crow in the 21st century. It must end. We have a moral and constitutional obligation to act,” he continued.

Many voting activists have said that this law targets black voters and puts up unnecessary barriers aimed to keep people of color out of the polls.

⅓ of Georgia’s residents are black, and it’s been proven that black voters are more likely to move precincts frequently, work multiple jobs, and less likely to be able to provide the identification that is now necessary under this law. These are all things that make voting more difficult now that the bill has been passed. Not to mention, black voters in Georgia on average have to wait much longer in line than white voters.

MSN reported on a study that confirmed this, “An analysis of data collected by Georgia Public Broadcasting and ProPublica found a significant disparity in who had to wait the longest: The average wait time after the 7 p.m. scheduled poll-closing time was 51 minutes in polling places that were 90% or more non-White. But it was just six minutes in polling places where 90% of the voters were White.”

The law, which was enacted Thursday night includes a ton of new voting restrictions such as limiting the use of ballot drop boxes, requiring photo identification for absentee voting and gives runoff elections a shortened time frame. Under this law state lawmakers also have more control over the elections.

Overall, a lot of people are frustrated by the unnecessary complications that this law brings to voting, and believe voting should be something easily accessible to everyone.

Biden offered further statements about the unjust nature of the bill.

“If you want any indication that it has nothing to do with fairness, nothing to do with decency, they passed a law saying you can’t provide water to people standing in line while they’re waiting to vote?” he said. “You don’t need anything else to know that this is nothing but punitive, designed to keep people from voting. You can’t provide water for people about to vote. Give me a break.”