Substitute Teacher Gets $27,000 From Former Student 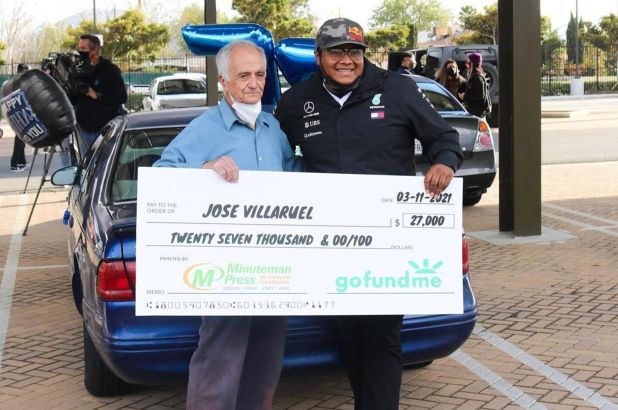 Earlier this month, a substitute teacher in Southern California received a check for $27,000 from a former student of his when the student saw that his teacher had been living out of his car for eight years. Raised by a GoFundMe page online, the student, Steven Nava, gifted the money to the teacher, Jose Villarruel, on his 77th birthday. The student’s former teacher was thankful beyond words, and the money helped him get out of the financial rut that he had been stuck in for years.

“Like many others around the country, Jose Villarruel has been struggling financially during the coronavirus pandemic. The substitute teacher from Southern California saw his hours cut as schools around the country closed their doors to slow the spread of the virus starting in early 2020. According to KCBS, Villarruel had already been living out of his car for years to help provide for his family with the little income he made, and the change to his situation made things worse,” states People.com.

The coronavirus pandemic has hurt people financially and emotionally, but Villarruel has been one of the many hundreds of thousands of people who have been especially vulnerable to the effects of the pandemic. Villarruel’s job was as a substitute teacher, but like many people, he lost his job as part of the country’s efforts to try and save money during this unstable time. While he may have been in a bad situation before, the pandemic made it ten times worse.

“Under normal circumstances, substitute teachers can expect to bring in anywhere between $22,000 to $32,000 a year in the United States, according to data from ZipRecruiter. Typically, substitutes make around $10 to $15 an hour. Nava took it upon himself to start a GoFundMe earlier this month to help Villarruel. The campaign raised more than $27,000 in six days,” reports People.com.

With the generous efforts of Nava, the GoFundMe, and the amount of money he raised, Villarruel was able to visit his family in Mexico and be with them while everyone waits out the pandemic. Since substitute teachers get paid very little, Villarruel had been living off of his social security money, while also sending as much as he could to his family in Mexico.

“Mr. V has influenced myself and others to be a better person and character among others,” Nava said. “He’s taught me to have that drive and that ‘never give up’ attitude whenever facing a struggle in my life and that’s what’s helped me be the person I am now,” says Nava from FoxNews.