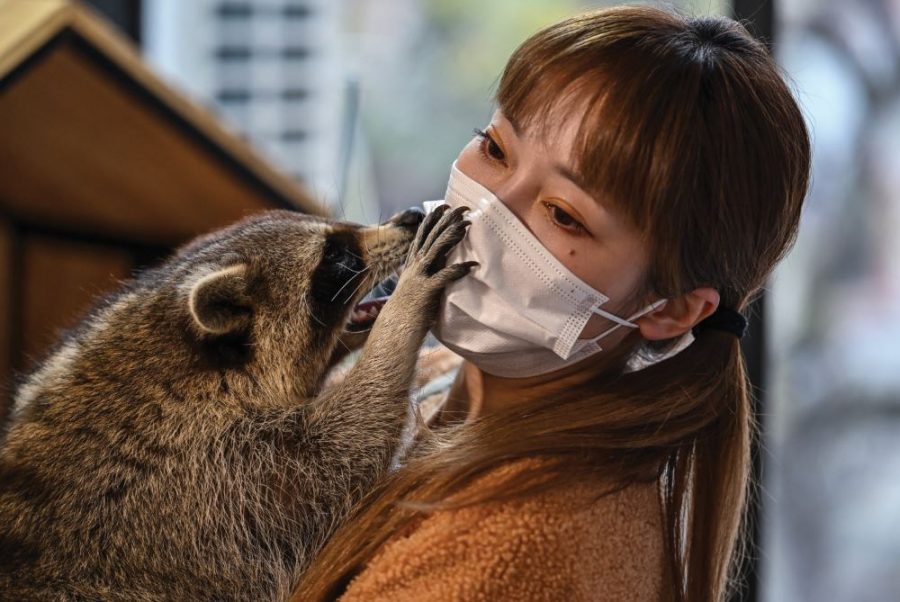 Raccoon with Lady in a Cafe

Imagine sipping a nice warm cup of coffee in the morning and then out of nowhere a raccoon sprints across the room. Normally, that would be a nightmare for most people, but in Shanghai it’s the next big thing.

There are dozens of animal cafes in Shanghai and they usually consist of dogs and/or cats, but one animal cafe stands out from the rest and it’s called Raccoon Cafe. What sets Raccoon Cafe apart from all the other animal cafes is that instead of dogs or cats they have snakes, lizards, raccoons, and many other exotic animals. It costs $15 to go to and the menu is very limited because the raccoons can’t be around hot drinks.

“The close interactions with wild animals not only fuel suffering and cruelty, but also creates a hotbed of diseases that could exacerbate the likelihood of zoonotic diseases’ emergence and spread.” says Evan Sun, a scientist and campaign manager for World Animal Protection

The cafe’s owner has had troubles with some of the animals, especially the raccoons. “They can be aggressive,” says, Cheng Chen She has scars on her wrists from the raccoons.

Are exotic animal cafes a fun and new experience, or an animal cruelty issue? Eduardo Nuno, a senior, responds, “It would be alright if they actually had the facilities to care for the exotic animals, but I’m assuming they don’t. In the end, wild animals should live in the wild and unless it’s for research or sanctuary, we shouldn’t keep exotic animals out of their natural habitat.”

It’s all fun and games until someone walks out of a cafe with a snake in her purse.