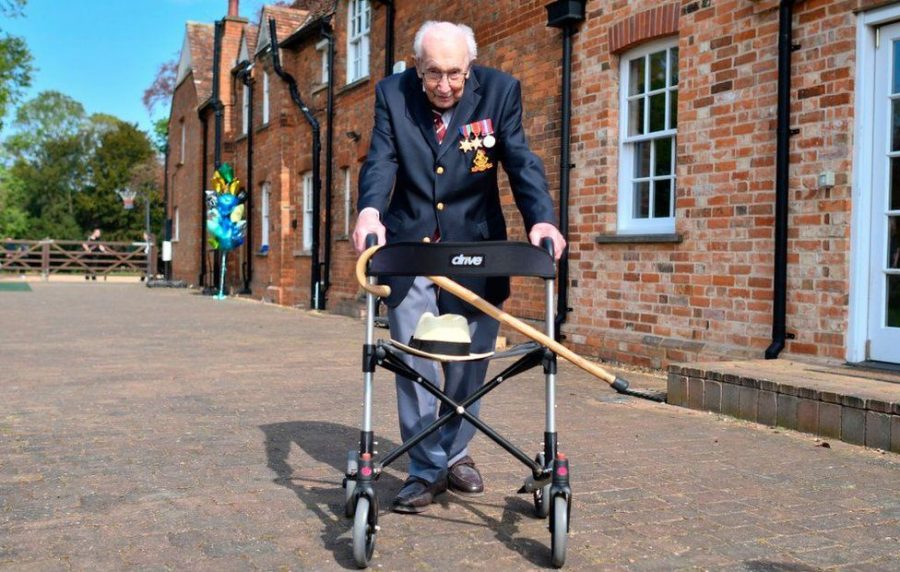 This is an image of Captain Sir Tom Moore.

At the age of 100, Captain Sir Tom Moore unfortunately passed away on February 2, 2021, and The New York Times and BBC helped share his extraordinary memory of walking around his garden to raise money for charities.

He is popularly known as Captain Tom for shining some positive light during the heat of the Covid-19 lockdown. He did so many amazing things during his 100 years of life, like fighting in World War II, and raising millions of dollars for the National Health Service.

In previous weeks, before his death, he was being treated for pneumonia and he also tested positive for Coronavirus. He grew in everyone’s hearts 82 steps at a time, by walking 100 laps around his garden. His son-in-law bet him 100 laps in exchange for a pound per lap before turning 100, his motto was “Tomorrow will be a good day.”

“The walks became a media sensation when Ms. Ingram-Moore publicized them and began an online fund-raising campaign for the National Health Service. With donors that included Prince William, who called him a “one-man fund-raising machine,” Mr. Moore quickly raised 32.8 million pounds, or $45 million,” states The New York Times.

He took a trip with his family to Barbados, and many questioned why he went on the vacation during a pandemic, but his defenders pointed out that the trip was paid for by British Airways. On December 19th the Prime Minister, Boris Johnson, tightened travel restrictions after a new variant of the virus was discovered. There is no evidence that Mr. Moore got sick on the trip, and on Dec. 18th a picture was posted of him in shorts with the caption, “Enjoying a beautiful family day in the Barbados sunshine.”

Last July, he was officially knighted by the Queen at a special ceremony at Windsor Castle. The Buckingham spokeswoman had some very kind words to say about the Queen meeting Capt Sir Tom and his family. Capt Sir Tom also became the oldest person to have a UK number 1 single with his song, “You’ll Never Walk Alone” with Michael Ball. The Prime Minister also said some kind words about his passing.

“In a statement, Prime Minister Boris Johnson said: “Captain Sir Tom Moore was a hero in the truest sense of the word. In the dark days of the Second World War he fought for freedom and in the face of this country’s deepest post-war crisis he united us all, he cheered us all up, and he embodied the triumph of the human spirit,” explains BBC.

He was very active even into his late 90s, like mowing the lawn, tending to his greenhouse, and driving his own car. Two years ago, he was in the kitchen and fell, breaking his hip and rib and also puncturing his lung.  His hospitalization led him to an enduring appreciation for doctors and nurses of the NHS.

“Part of the money is being used to create therapeutic facilities for doctors and nurses to decompress after their work treating Covid patients. Mr. Moore said he had viewed his fund-raising as a way to support health workers, much as he recalled Britons supporting him and his fellow soldiers during the war,” explains The New York Times.

Ultimately, Captain Sir Tom Moore was a war hero, knight, singer, and pandemic hero all in his amazing 100 years of life.