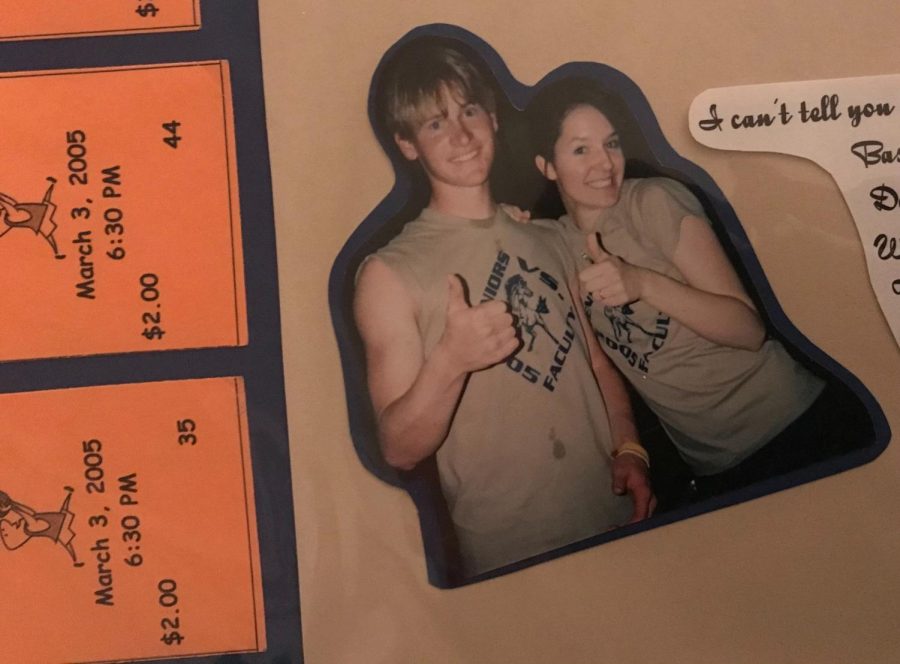 This was taken during the basketball game of Faculty vs. Students.

Shadow Ridge High School has been shaping their students to be functional members of the community ever since the school was established in 2003. The school opened in August of 2003 and welcomed the first group of students during the school year of 2003-2004. The graduating class of 2005 was the first batch of seniors at SRHS and it was a memorable year with the help of the first-ever elected Senior Class President, Erica (Watson) Sauer.

“I was at Centennial for my first two years and then went to Shadow Ridge when it opened. We came in as juniors and there was no senior class; they were allowed to stay at Centennial instead of changing schools their senior year. The school had a close-knit feel to it those 2 years. We had a lot of fun.”

One of the things Sauer wanted to establish right away, as Senior Class President, were traditions that would live on throughout the future graduating classes.

“The first day of our senior year we had a sunrise breakfast at the football stadium. All of the seniors were invited to come before school and pick up their senior shirts, have doughnuts and watch the sunrise on their last first day of high school. That was a pretty memorable moment for me,” stated Sauer

Sauer did her best in executing the first Senior Sunrise breakfast at the football field where they got to wear their senior shirts and eat doughnuts. It was a special moment for seniors to watch the sunrise on their first last day of high school, and it became one of the lasting traditions at Shadow Ridge. As they were the first class of graduating seniors, they had a unique situation where they created the traditions of the school. The faculty versus student basketball game was also one of the first traditions that they implemented.

Sauer continued, “We had a lot of fun organizing the faculty vs. student basketball game. I am not sure if they still do it now but we had a blast doing that. I also loved the rivalry between Shadow Ridge and Centennial! There was so much energy at any of the games against them. Arbor View hadn’t even been built yet.”

“I always remember back in high school how comfortable I felt at school and how I created those relationships with my teachers, I really felt involved,” Sauer reminisced.

She was involved with music and Student Council, but other than that, the most important thing to her was her career as a volleyball player. She had dreams and hopes to be able to play at a collegiate level at the time. With her work as a student, a council member, and an athlete, she managed her schedule pretty well and was still able to enjoy high school life with her circle of friends.

“I went back to Shadow Ridge in 2015 for our 10 year high school reunion,” Sauer stated.

They invited family and friends to walk around the campus and see their old friends. She felt nostalgic going back to her alma mater where everything started. She hesitated at first to be the Senior Body President because she was afraid to give a speech at the graduation ceremony, yet became their leader and made her year extraordinary. As she moved forward with her life, Mrs. Erica Watson Sauer has a job as a fitness instructor, and, with her high school sweetheart and husband, Stephen Sauer, she has three lovely daughters. They carry a strong bond with each other and support one another with their aspirations and dreams. They hold onto their faith and family to get through the obstacles in life.

“To those seniors out there, my biggest advice is to be kind to one another. It is the relationships being formed with teachers and friends that make high school unforgettable. How you treat people is what matters. Lastly, you should have fun, and don’t try to be a grown-up because you have the rest of your life to be one,” stated, Mrs. Erica Watson Sauer.