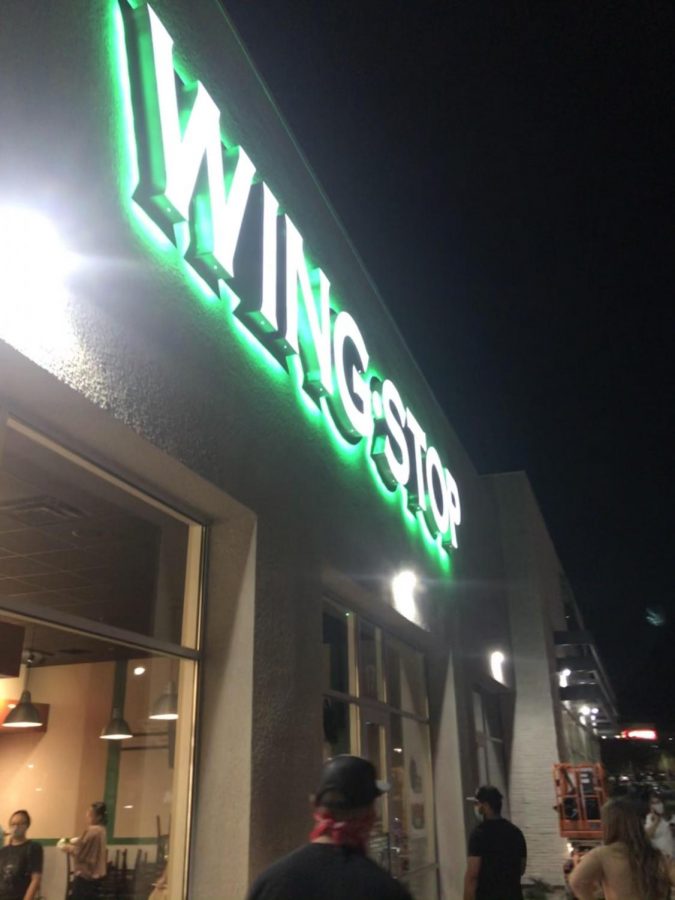 Wing-Stop is one of the top wing spots in the U.S. and can be found at almost every gathering. The now-famous chain started as a small wing restaurant in Garland, Texas opened in 1994. They now have over 1,500 locations worldwide and are still growing.

Because of Covid-19, Wing Stop has had to make a few adaptions like most other businesses. With its small location, they have gotten rid of their limited dine-in option which in turn has put the order and pick-up line, quite literally, out the door. When I arrived at Wing-Stop, on a Friday night, the small building was loud and crowded with people waiting in line to order and get their food. Thankfully everyone was wearing a mask but the 6-foot social distance policy was being followed very loosely. All team members were wearing masks and the cashiers had a hard plastic panel in front of them.

Ordering was a bit of a challenge, although the cashier was extremely nice it was incredibly hard for us to hear each other because of the large crowd. I picked the flavors I wanted before I even got to the location but figuring out what wing pack I wanted was a bit confusing for me. I eventually settled on the Crew Pack, which came with 30 wings with 3 different flavors, 3 dipping sauces, 1 fry, and 1 veggie tray (I opted out of the veggie tray and instead got another tray of fries) the total came out to $34.99.

After ordering I was told to wait in my car for approximately 30 minutes. What was a little disappointing was that they had no way of telling me when my food was done and I just had to guess. I assume that is why the building was so crowded in the first place. I waited in the car for about 35 minutes before going in to get my food. The food was done by the time I got there so all I had to do was give them my name and they grabbed my food from off of a rack.

The wings came in Styrofoam containers with wax paper, which did a really good job at keeping the wings hot for the journey home, and the fries came in a paper carton with wax paper with all the food in a large paper bag. The three flavors I ordered were Spicy Korean, Mild, and Lemon Pepper. The disappointing thing about all of the wings was that there weren’t enough flats but it is something I can look past; no matter what anyone says, the flat wings will always be superior.

My personal favorite was the Spicy Korean, which was a wet wing. The wings were almost dripping in the sauce which is fine by me. They were the perfect mix of tangy and sweet with a bit of spice, there was a hint of ginger and sriracha but not so much as to be overbearing. The wings themselves were beautifully crisp on the outside and super juicy on the inside.

For me, the Lemon Pepper took second place. I am usually not a fan of dry wings but this lemon pepper was delicious. The number of flavors really took me by surprise, it was tart and super zesty, and the pepper really helped to round out the flavor. The wings were also insanely crispy to a level that the saucy wings could only dream to achieve.

In a very disappointing last place came the Mild. How a wing manages to be dry and soggy at the same time beats me. The wings almost tasted plain because of how little sauce there was, it had absolutely zero kick. Overall, this was just a very below average and sad wing.

Now even though this review is about wings, I think the french fries really stole the show. In all honesty, these might have been the best fries I’ve ever had. Each fry was garlicky, salty, and sweet. This french fry may have ruined all other fries for me; they were that good.

Overall I enjoyed my experience at Wing-Stop, the ordering process was a bit rough but the wings and fries more than made up for it, with the exception of mild. I would definitely recommend Wing Stop but maybe skip the crowd and order in with Uber Eats or Grub-hub. I give Wing Stop 7 out of 10 chicken wings.