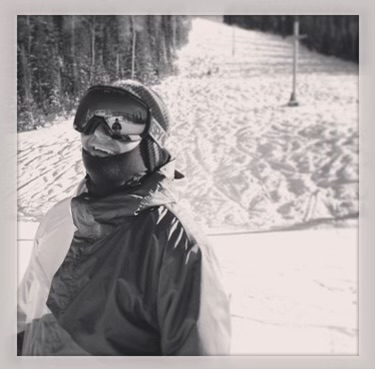 On the surface, 48-year-old Las Vegas local Keith Pfahler may seem like the average middle-aged man, but there is much more to him than meets the eye. Pfahler’s days, though currently filled with construction work, once consisted of scaling mountaintops thousands of feet high, subzero temperatures, and the exhilaration of being a pro snowboarder. Though he is retired now, he was ranked 13th in the world in his heyday. He also won the Vans Triple Crown and the Swatch World Border Cross at Copper Mountain.

Pfahler combined his construction background with his chilly passion to open the first American snowboard park- Outlaw Park in Bear Mountain. Pfahler was a competitive snowboarder from 1988-2005, beginning when he was just 16. Though he only snowboards recreationally now, his pro-boarding days hold both life lessons and accomplishments worth noting.

“I started snowboarding on a high school skiing trip. I had already been a skateboarder, and when I saw the snowboarders, I knew that I wanted to try it out. When I attended a snowboarding lesson, the instructor dismissed me almost immediately because my skills already outweighed his.”

Pfahler found interest in snowboarding from a young age, and it came quite naturally to him, likely due to his background in skateboarding and innate talent.

“I think that I enjoyed snowboarding so quickly because of the freedom it provided. With other sports, there is less autonomy, because there are teams, but with this, I could go where I wanted, and perfect my skills to my liking. I was mostly my own judge.”

He is a free spirit and appreciated that snowboarding catered to this trait. He also liked the lack of external judgment which allowed snowboarding to solely be his experience.

“I definitely faced snowboarding challenges. I struggled with confidence, and I also had to fight to make the snowboarding park a reality. At the time, skiing was a dying sport, and I wanted to push for snowboarding to take its place. There was a lot of convincing and lawyers involved. Thankfully, winning some competitions helped boost my morale, and I ended up being able to open the park.”

The ex-pro struggled with both personal and professional challenges related to snowboarding, but ultimately overcame them.

“Snowboarding taught me to push myself, and I was truly able to see how far I could go before I was on the verge of death. It has also taught me important lessons on survival.”

Though Pfahler no longer competitively boards, the skills he acquired while doing so touch on important and essential human attributes, benefitting him for the rest of his life, and serving as an inspiring message on persistence and personal liberty for all who know his story.