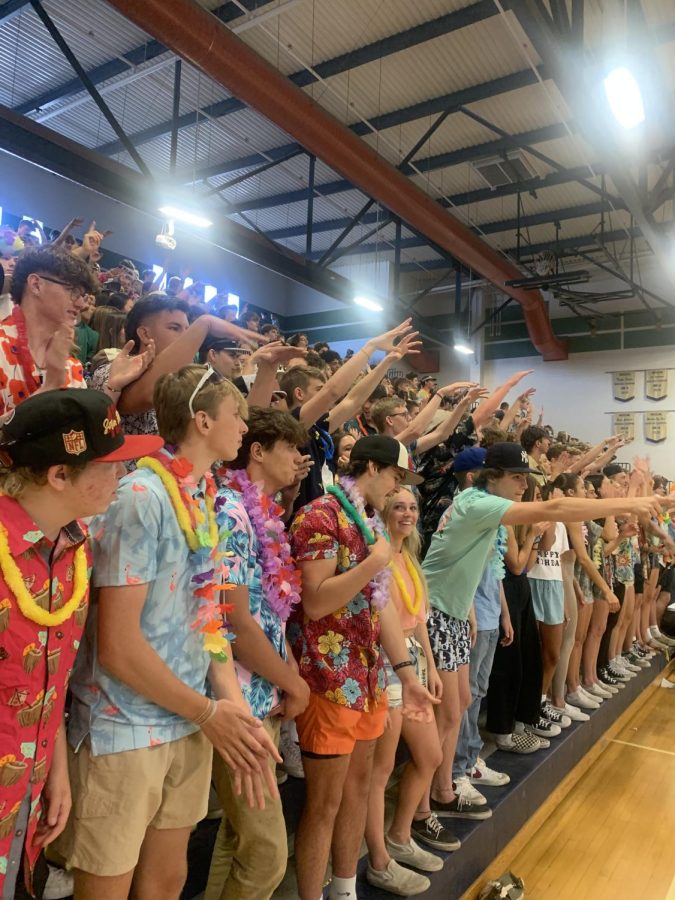 Mustang fans showed up in Hawaiian themed apparel for the game

After a long and successful season of hard work on and off the court, the Shadow Ridge High School Men’s Varsity Volleyball Team capped off their year with the highest achievement they could possibly earn. The team triumphantly rose to one final challenge and brought home a win in the state championship. The ride has been far from easy, but the Mustangs certainly showed success long before proving themselves to be champions. Going into the final game, the Mustangs were the highest ranked team in all of Nevada, leading 5A with a stunning 27-6 record. They charged out of the regular season and into the playoffs, plowing down Silverado in the quarterfinals and taking out Palo Verde in the semifinals. For the state championship, the Mustangs led a 3-1 effort to bump out Green Valley and bring home the state rings.

The state game was at Shadow Ridge, where the team’s dedicated fans and alumni truly turned out to support. Mustang apparel was Hawaiian themed, and waves of colorful leis could be seen all through the stands. The Mustangs got off to a strong start, taking the first set 25-17.

Coach Wilson shared, “Preparation for today started at the beginning of the season with the guys putting in the work in practice. Green Valley is a tough opponent. The boys had to make sure they understood their tendencies and excexute the ways they needed to.”

The second set was much tougher, and the boys fought their hearts out to come back from an eight point deficit and tie it up at 24-24. After a back and forth rally of points and the Mustangs doing everything they could, Green Valley unfortunately came out victorious, tying the sets up.

Mustang volleyball alumni, Garin MacFarlane stated, “During the second set, I felt a shift in momentum for Shadow. Even though they started off slow, they came back and made it close. This momentum carried into the next two sets.”

The third set consisted of an extremely strong finish by Shadow Ridge, with several outstanding hits pounded down by the boys, including Trevor Prince, senior, who delivered the finishing blow to win the set at 25-20.

Prince explained, “My drive for the whole game was looking back at the past four years that I’ve spent in the gym playing volleyball, whether it was at Shadow or with club. I was thinking about all the time and dedication I’ve put into the sport and coming into the game I knew I had to bring it home for all the supporters and the younger generation to motivate them so they will want to achieve the same thing.”

By the final set, the team looked like a well-oiled machine, working in perfect harmony to pass, set, and hit their way to their white banner in the gym. Shadow closed out the game 25-17, the same way they started it, and sent the Gators packing. The fans immediately stormed the court, celebrating the triumphant heroes who would soon be sporting their medals and hoisting their trophy for all to see.

The team’s senior libero, Justin Lewis said, “It felt awesome. The fact that it was my birthday and I got to win and celebrate with all my friends definitely created a core memory that I’ll remember all my life.” Wilson added, “Teamwork, execution, discipline, and sticking to the gameplan were the key elements in the team’s success. However, we could not have done any of it without the support of the parents and the crowd!”