Greatness at the Grammys 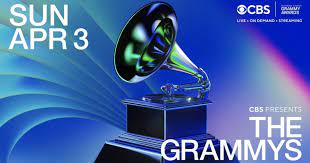 On April 3, 2022 here in Las Vegas, the 64th annual Grammy Awards were held. One week after the Oscars, the viewers were wondering if there was going to be any drama. Thankfully, there wasn’t. With 86 categories in this year’s award show, many people walked away victorious.

As with any other award show, lots of people and fashion magazines love to celebrate and critique the celebrities red carpet outfits. Vanity fair stays up to date with their “Grammys Best-Dressed List.” The amount of time and dedication the artists and designers put into their outfits really shows. One who really stood out was Olivia Rodrigo wearing Vivienne Westwood. The floor length black gown with the off the shoulder sleeves, and elbow length gloves and the pink glowing body silhouette made jaws drop.

“The “Drivers License” singer’s sleek black Vivienne Westwood dress is accentuated by a gradient of pink crystals mimicking the female form with thin side straps emphasizing her neckline. A matching pair of black opera gloves and a pair of thin chokers add dramatic elements to the otherwise simple look, elevating the dress from gala material to a capital-L look perfect for the pop princess. Sometimes an understated gown with diamonds all over the bust is the best way to go,” explains Glamour.com.

Even though the red carpet looks often steal the show, the real winners are the artists walking away with a Grammy. Jon Batiste walked away with five Grammys that night. Silk Sonic was a close second for most Grammys bringing home four. Batiste walked into the award show with the most nominations, 11. He won Album of the Year, Best American Roots Performance, Best American Roots Song, Best Score Soundtrack for Visual Media, and Best Music Video. Batiste made a heartfelt and emotional speech as he accepted the award for Album of the Year with “We Are”.

“I believe this to my core, there is no best musician, best artist, best dancer, best actor,” he began. “The creative arts are subjective and they reach people at a point in their lives when they need it most. It’s like a song or an album is made and it’s almost like it has a radar to find the person when they need it the most,” states Batiste.

Along with the acceptance speeches, there was a memorial for Taylor Hawkins, Foo Fighters drummer, who had passed just nine days before the Grammys. The Foo Fighters were supposed to perform at the show, but with the sudden and tragic passing of the drummer, their performance did not happen. Host Trevor Noah, made a short but sweet speech leading into Hawkins’ memorial, which then led into the memorial for all of the amazing artists we’ve lost this past year.

“So, this was the moment in the show when I was supposed to be introducing the Foo Fighters. We would have been celebrating with them as they won … three Grammy Awards earlier today. But they are of course not here due to the tragic passing of their legendary drummer, Taylor Hawkins. Our thoughts go out to Taylor’s family, his friends, the Foo Fighter family and all of their fans around the globe. We would like to take a moment now to remember Taylor,” said Noah.

Overall, the night was full of love, laughs, sadness, and so much more.