Welcome to The House 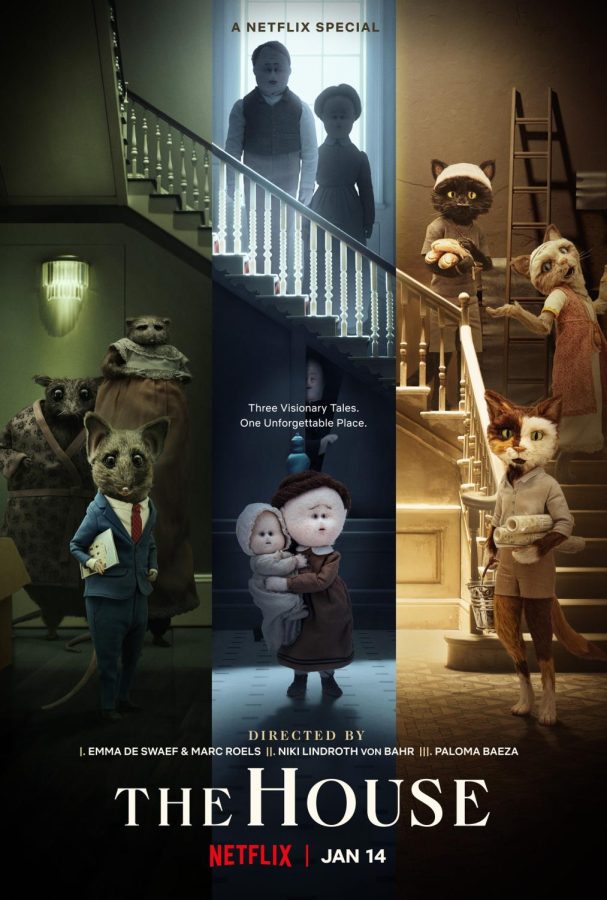 Official Poster for "The House"

On January 14, 2022 Netflix released its new stop motion animated movie, The House. With a screenplay by Enda Walsh and directors Niki Lindroth von Bahr and Paloma Baeza, The House currently sits at a 96% rating on Rotten Tomatoes. The official synopsis of The House being “Across three generations, a poor family, an anxious developer and a fed-up landlady become tied to the same mysterious house as they try to make the strange building into a permanent home.”

The House maintains a mysterious and eerie tone throughout all three of the short stories presented in it. The first story in the film is widely considered to be the scariest, and by some people, the best part of the film. It tells an eerie tale of a family who, by a set of circumstances, leave their humble home and move to what is the staple house throughout the film, but everything is not what it seems. This part is very suspenseful as more information about the house is revealed.

The second story follows a mouse who is a home developer. As he tries to sell the vermin infested house, two peculiar characters appear and refuse to leave.  The Developer gets frustrated and begins to go mad as more about the two guests and him are revealed.

In an interview with Gamerant, Niki Lindroth von Bahr remarked, “He’s supposed to be someone who acts quite human. He’s trying to reach for success and wealth by buying this old worn-down house and renovating it into some sort of Kylie-Jenner-

mansion and selling it at a much higher price.” The Developer is left without a name throughout the story.

Bahr said “It was my intention to leave him without a name because I do feel that for this character, I would love for him to just be all of us.”

The final third of The House takes place in the near future, and follows a cat called Rosa, a landlady set on renovating the house and restoring it to its former glory. The house is serving as an apartment complex to a few quirky guests who don’t pay rent, all amidst a setting in which the world has been flooded and the house is one of the only buildings left standing. The story has themes of denial, and moving on. In an interview with Gamerant, director Paloma Baeza elaborates, “It seems pretty obvious that she really should be making some changes in her life. And she’s just unable to do that because she’s obsessed and blind to the thing she needs to do.”