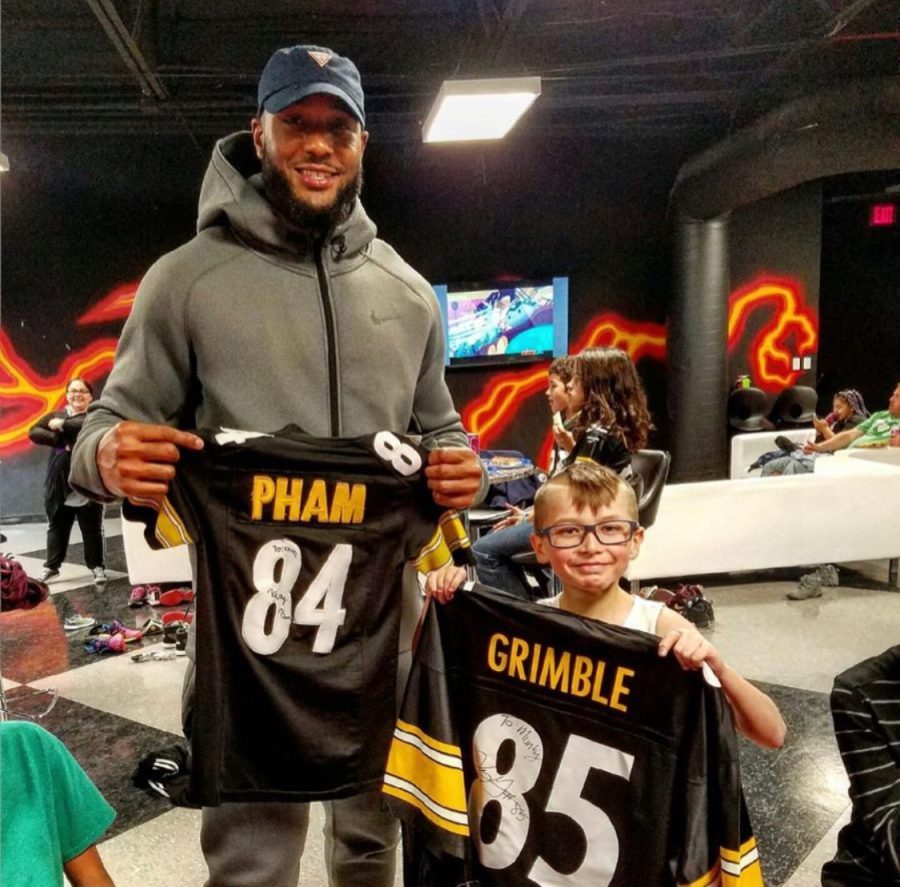 It is excessively rare for the average person to befriend a celebrity. Now imagine how surreal freshman high schooler Kenneth Pham Jr. feels knowing that he is close friends with NFL tight end Xavier Grimble. Being that Grimble was born and raised in Las Vegas, Pham Jr. feels that deep connection within. That deep connection would stay even six years into the future. Pham Jr. had never anticipated that one flight from Pittsburgh to Las Vegas would change the course of his new friendship with Grimble.

The young idol has made such an impact on Pham Jr. that he has transpired and inspired a new fascinating brotherhood revolving around mentorship. Pham Jr. was 8 years old when he was flying back from a Pittsburgh Steelers football game. It was then tht Pham Jr. encountered Bill Grimble, Xavier Grimble’s father. They were sitting next to one another on the plane when Bill Grimble saw Pham Jr. in his Steelers attire. After Bill Grimble confronted Pham Jr. about his outfit, he claimed his son played for the Pittsburgh Steelers. After asking what number he wore, and explaining that it was 85, Pham Jr. knew immediately who it was.

“I asked him if his son was Xavier Grimble, when he said yes he then asked me how I knew. I recognized the name from Madden, I literally played with his virtual character,” stated Pham Jr.

Bill Grimble exchanged numbers with Pham Jr.’s father and has kept in contact ever since. Since both Bill and Xavier Grimble lived out in Las Vegas, it was easy for them to connect.

“The first time I met him [Xavier Grimble] was at my 10th birthday party. We signed and swapped jerseys. He posted me on his Instagram and I felt like a celebrity. After he posted about me a few other Steelers players decided to follow me on Instagram too,” said Pham Jr.

Not only did Pham Jr. appreciate the increased attention on him and his new friend, but Xavier decided to take it upon himself to give Pham Jr. Heinz Field tickets for him and his family to go to multiple games. It was there that Pham Jr. got special access.

“He {Xavier Grimble] brought me to the player tunnel and I was able to meet so many players like James Connor, Antonio Brown, JuJu Smith-Schuster, and even Ryan Shazier before his injury,” recounted Pham Jr.

The Pittsburgh Steelers are known for their crowd engagement. A weapon they use to combat that is their Terrible Towel.

“He [Pham Jr.] ran up to them and they signed his Terrible Towel,” stated Pham Sr., Pham Jr’s. father.

After a season-ending injury, Xavier Grimble defied the odds and was able to play a little bit longer after his contract with the Steelers ended. He signed with the Colts practice squad, picked number 43, the same number as Pham Jr., then later was picked up by the Ravens practice squad before getting hurt once again. Now as a free agent, Xavier Grimble is on a mission to get re-signed by the NFL, rooting for a team close to home.

“He [Xavier Grimble] was my mentor, he would call me from miles away during his schedule just to wish me luck on my games. I owe that man more than he would ever know,” expressed Pham Jr.