Caroline Dumargne: When France and Flag Football is a Good Combo. 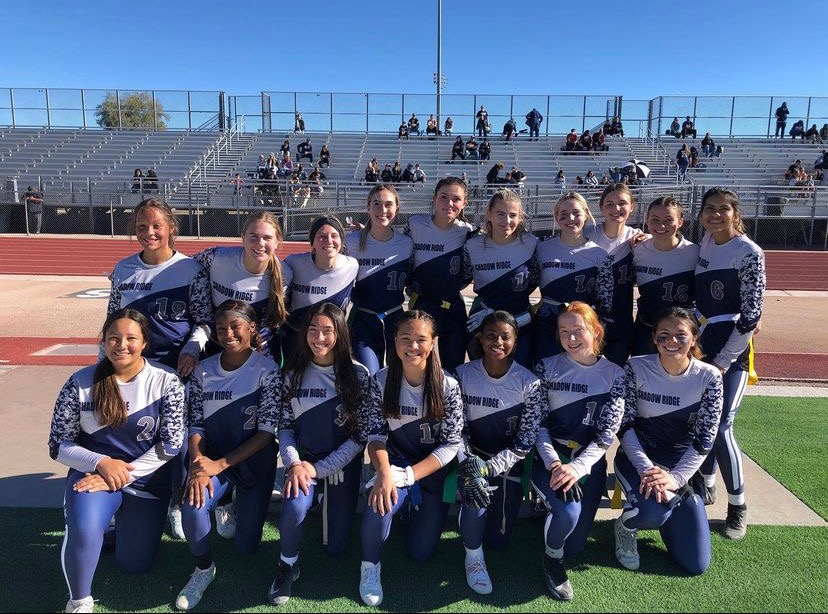 Junior Caroline Dumargne, the second from the right on the bottom, and the Flag Football team

“My mother was an exchange student herself in 1988 and it really inspired me,” she explained. “Plus I love to travel and to discover the world and other cultures, and I also love meeting new people so it’s obvious why I chose to become an exchange student.”

She is really enjoying her time here, she got the chance to meet wonderful people, make new friends, learn a lot about the United States’ culture, and even rediscover herself.

“I like the fact that high school finishes so early, that way I have plenty of time to do something after school, and I also admire how girls are really recognized in sports here.”

Not  by chance, she showed up to the early Flag Football’s practices in August, she continued until the tryouts mid-November, and she made the varsity team.

“One of my friends told me that she wanted to try out for flag, because she liked it in her freshman year,” Dumargne said. “ I really like sports, and I thought that learning how to play a sport, that doesn’t even exist in my country, could have made my experience here even better.”

She wasn’t wrong. At the end of the third day of tryouts she knew she had made the team, her coach sat the players down, and told them: I know you are all looking forward to this season, because you all made it.

“I got happy tears and I felt so happy, and proud of everything I worked hard for,” Dumargne revealed. “I love my team, the girls are the sweetest people, and they were always here trying to explain to me what to do and how to do drills. They make me so happy, because they all seem genuinely excited we got such a great team with determined girls in it.”

The flag football team had a scrimmage on November 27th against Desert Oasis, which was the occasion for Dumargne to find out what a real flag football game looked like, even though the rules slightly changed, seeing everyone’s performances has been really impressive for her.

Flag football’s first official game will be on Wednesday December 1st, against Arbor View, and the team is looking forward to proving everyone what they’re capable of.

Their goal this season is to go as far as they can during the season, ultimately win the playoffs and, hopefully, go to the state championship.