Making a Run at State 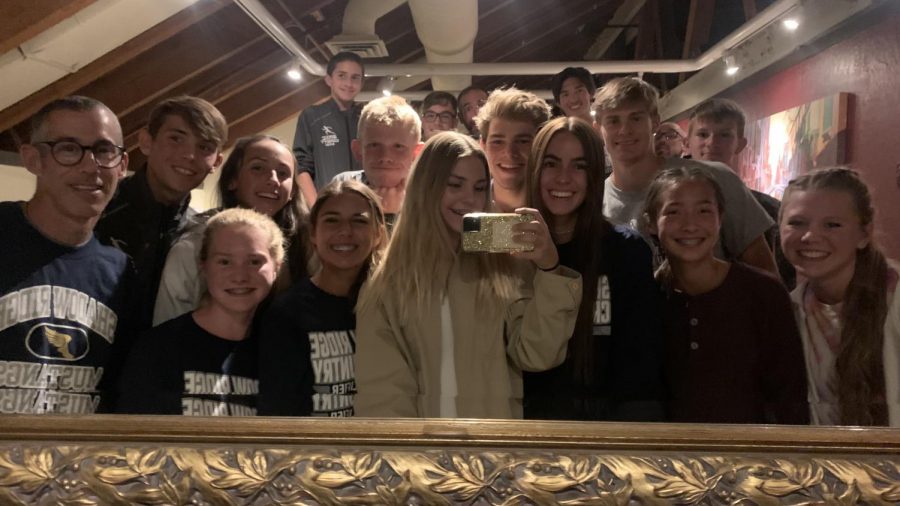 The cross country team at Olive Garden preparing to race the next day (Photo By: Ellie Reese)

Last weekend, the Men’s and Women’s Varsity Cross Country Teams travelled to the state competition together, doing something that no two Shadow Ridge teams have ever done. For as long as anybody can remember, the Mustangs have had a record of sending somebody to state for cross country every year. However, this year was the first year that Shadow has ever taken both a men’s and women’s team all the way to state. On the path to state, the women’s team managed to take first at regionals and the men’s team scooped up a third place spot. Excitedly, they then prepared for one last week to make the journey to run up in Reno against the best teams in the state. After a long bus ride up, the athletes loaded up on plenty of carbs at Olive Garden and then got a nice and healthy night of sleep at a hotel before the big day. The next morning, the boys would proceed to place fourth in the state and the girls would take second. Ryan Watts, senior, earned himself a medal by proving himself as the sixth fastest person in the state after previously taking second in the region. Despite poor weather conditions and a strenuous course, both teams performed well and made their school proud.

After a full season of hard work and effort, the teams are happy to finally bring this year’s run to a close and finish off this year. Although running isn’t the thing for everybody, for those who have participated in cross country this year, it has been a great opportunity to bond with each other and represent what it means to be a Mustang.

Ethan Hughes, junior, explained that he enjoyed, “Being able to help encourage my peers to do the best they can,” while for Ryan Stevens, junior, the best parts of the trip was “Taking an ice bath the night before the race and competing with Ethan.”

The trip to state was a lot of fun, but cross country has also taught many of its members valuable, life changing lessons.

Alexis Abney, senior, said, “Cross country has helped me learn how to work hard and not give up even during tough times. It’s taught me discipline and the value of surrounding myself with positive people,” and Ellie Reese, senior, added that she’s started, “Recognizing that I can push past my limits.”

Senior, Dennis Speaks, shared, “Cross country has meant everything to me. Being able to run for Shadow is something I’ve been grateful for since freshman year and has kept me going as an athlete and as a student. I’m beyond grateful to have been able to represent my school at state and run with my team.”

The coaches, who have spent countless hours tracking the team and figuring out the best way to get the team to state, were obviously very happy with the opportunity to bring both of their teams to compete.

Coach Flynn reported, “This season was challenging and successful. Not only did we get a guys team and a girls team to state, but we placed very well. Through all of the long days and tough practices, we had Covid hanging over our heads and the fear that, at any time, we could have lost the opportunity to compete. But, through all of that, the teams made it. I couldn’t be more proud of each and every one of them.”

Coach Jimenez continued, “Running is hard. Running hurts. Waking up at 4:30am or 5:00am in the summer when everybody else is sleeping is hard. Running in 117 degrees in the afternoon when school starts is hard. As coaches, we do that with you. And when people suffer together, they form a bond. I admire all of the cross country kids for how hard they have worked this year. This has probably been Shadow’s most successful year ever in the sport.”