Influencer of the Year: Payton Garcia 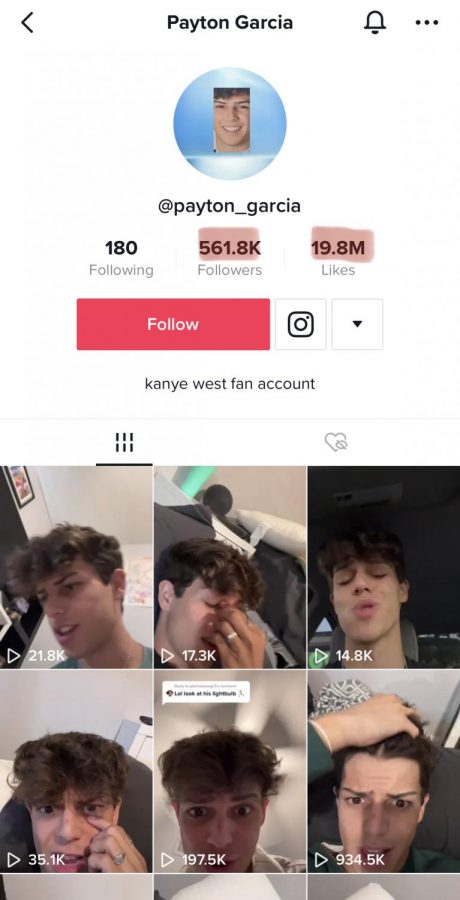 Tik Toker, Payton Garcia, has wracked up over 500K followers on the app

With the rise of the popular app Tik Tok, many people are becoming “Tik Tok famous,” including Shadow Ridge’s own senior, Payton Garcia. Garcia has 561.7K followers on the app, and 19.8M likes, having only started the account in November 2020.

“I liked the idea that anyone could gain an audience on the app no matter who they were,” says Garcia.

This is the case for many people on the app who have gotten popular. Some get popular from their talents like dancing and singing, such as Charli D’amelio and Lauren Gray. Garcia got popular from his jokes and funny videos. From joking about the invention of ties, the new popular TV show “Squid Game,” and even the students who bring blankets to school.

“I just post about whatever is on my mind and a lot of people always end up watching it. I’m not sure why honestly most of the stuff I say is pretty dumb,” says Garcia.

Despite his videos being “dumb” Garcia still thrives off of his “Influencer” status. “[…] the best part of being an influencer is definitely all of the babes I get,” says Garcia. “I can’t get women to stay away from me.”

But with fame comes responsibility.

On top of the various men that Garcia has to battle for their girlfriends, not all of his peers share the same humor as him. This can cause some harsh opinions and criticism.

“[…] his first video from 2020 was pretty funny. So was the Ariana Grande one,” say junior Savannah Wagner.

Amidst the few negative reviews, Payton still has a large number of supporters. His most watched video, with nearly 935K views, features Garcia poking fun at the kids who bring blankets to school and wear them over their backpacks.

“I hate being recognized; it’s extremely awkward every single time and I never know what to say,” says Garcia. Ironically, one of his most popular videos, with 460.7K likes, shows a video where someone recognized him at a popular Disney theme park. Garcia talks about how weird it is to scroll through the “for you page” and see himself in a video, but how he feels privileged to be in the video regardless.

But Garcia makes sure he still remains humble about his fame, despite the multiple women he gets and the men he has to fight off everyday.

“It’s a pretty cool thing but at the end of the day I feel like it’s just a number on my phone that’s higher than everyone else’s,” says Garcia. “ It doesn’t mean that much.”