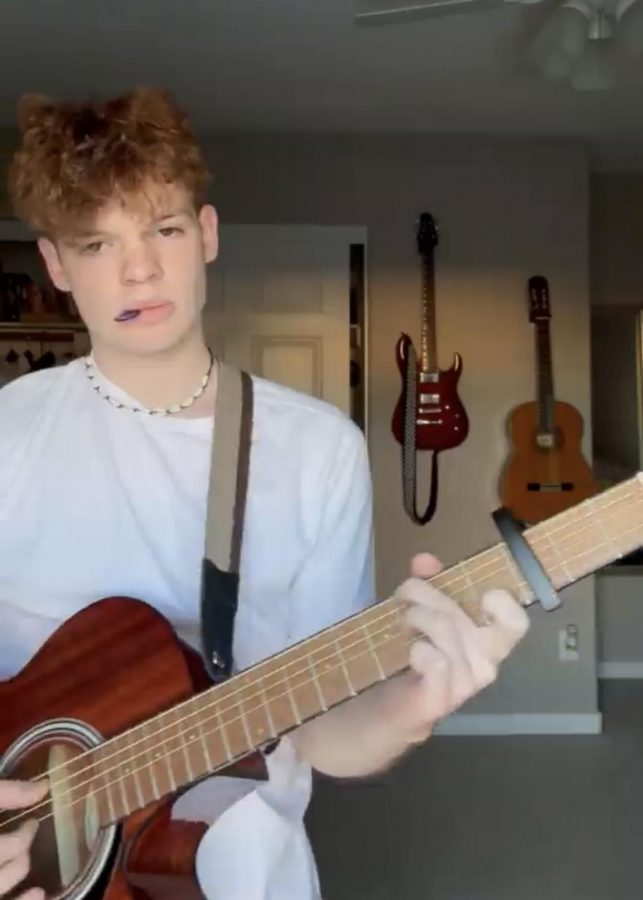 Junior Luke Hawley first showed interest in playing the guitar back when Covid-19 first began and has been obsessed with it ever since. His  journey  began a year and a half ago when he noticed that he had an old guitar in his house and he wanted to start something new to pass time during quarantine. Now Hawley has four guitars total, two electric and two acoustic, but when it comes down to picking which one he enjoys more, he prefers acoustic over electric. Hawley has yet to attend a strictly instrumental concert before, but would be interested in doing so.

Hawley does have a tiny bit of experience since he has band while he was in middle school.

“Yes, if middle school band counts. I think a professional concert would [be] really fun to go to,” stated Hawley.

When it comes to his preferences while playing, he loves playing outdoors because he is a firm believer that the tone sounds better. He loves playing along to songs including his favorite, “Slow Dancing in a Burning Room,” which is written by John Mayer. Hawley also mentions how the song “Neon,” which is also written by John Mayer, was the hardest song for him to learn. On the other hand, he states that “Smells Like Teen Spirit,”  which was written by Nirvana, was the easiest song for him to learn. Furthermore, Hawley goes on to reveal that his favorite guitarist is a toss up between John Mayer or Stevie Ray Vaughan.

Senior Micheal Dustin is one of Hawley’s closest friends who has the pleasure of witnessing his amazing talent.

“Luke is such an amazing guitar player. As long as I’ve known him he’s been shredding. He’s capable of playing almost any genre and he puts a ton of time into learning new things. He’s got a sense for music that is just incredible and he can come up with a melody out of thin air. He inspires me to better player myself,” Dustin stated.

In addition to playing independently, Hawley also expressed how he would love to expand his knowledge on being a guitarist through teaching those of the younger generation.

He also believes that continuing his career and creating a professional lifestyle for himself and being a guitarist would be amusing. He chooses to play the guitar in his free time, and gets a lot of enjoyment out of it. Students who follow Hawley on Instagram have the privilege of listening in on some of the songs that he enjoys playing.